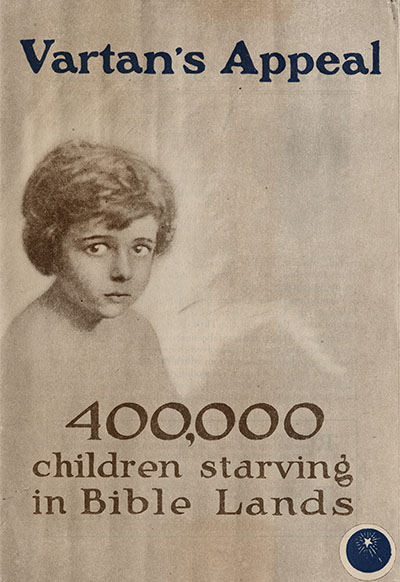 In early 1915, the Turkish government enacted repressive measures against minority groups within its territory whose loyalty was questioned. These measures were primarily against the Armenians, whose Christian religion set them apart from the Muslim Turks. The majority of Armenians were Orthodox, which was the majority religion of Russia (an enemy of Turkey) and made them a potential internal threat to Turkish security and its war effort.

The first in a series of Turkish government actions taken against the Armenians occurred in late April 1915 when 1,000 prominent Armenians in the capital city of Istanbul were arrested and deported to eastern Turkey to be murdered.  By the end of 1915, approximately 500,000 had been massacred and the majority of the remaining Armenians were deported to desert areas in the eastern part of Turkey where thousands starved to death, died of disease or became refugees.

Armenians were considered by contemporary Christians as the “oldest” Christian community in the world, being a direct link to the earliest days of Christianity. Christian missionaries from the United States comprised the majority of Americans living/working in the Ottoman Empire and they shared the same view.

Reports by the missionaries to U.S. diplomatic personnel described Turkish soldiers rounding up Armenian men and boys to be deported or massacred. According to one U.S. diplomat’s report, some of them were “clubbed and beaten and lashed along as though they had been wild animals and their women and girls were criminally outraged…”  With support from the U.S. Ambassador to Turkey, Henry Morgenthau, Sr., the missionaries started relief committees in the U.S. that were combined in the fall of 1915 into the American Committee for Armenian and Syrian Relief.

"Letters from private sources relative to Armenian persecutions which have reached the United States and been published in the newspapers have aroused a general and intense feeling of indignation among the American people. You are instructed to continue to use your good offices for the amelioration of the condition of the Armenians and to prevent the continuation of the persecution of the Armenians, informing Turkish Government that this persecution is destroying the feeling of good will which the people of the United States have held towards Turkey."

Ironically, when the U.S. entered the war in April 1917, the leaders of the relief organizations opposed the U.S. declaring war on Turkey, one of Germany’s allies, arguing that this would be detrimental to the interests of the Armenians. The director of the American Committee for Armenian and Syrian Relief lobbied relief workers, the press, Congress and the State Department against going to war because it would stop relief efforts and risk the property of American missionaries in Turkey.

Pamphlets in the Museum’s archival collection depict advertising the efforts of various American relief organizations and soliciting funds to ease the suffering of several predominately Christian minority groups in the near east, including Armenians, Syrians, Assyrians, Persians and Greeks.

One pamphlet, Vartan’s Appeal, uses the identity of an Armenian boy, Vartan, to symbolize the Armenians’ struggle to survive against hostile neighbors who have repeatedly tried to destroy the Christian, democratic, Western, values of the Armenians and other persecuted minorities.

U.S. President Woodrow Wilson is quoted in the pamphlet: "Reports indicate that of orphans alone there are more than 400,000. The situation is so distressing as to make a special appeal to the sympathies of all."

Sand to Snow: Global War 1915 (May 1, 2015 - April 17, 2016), one of the Museum of special exhibitions commemorating the Great War Centennial, included a British poster calling for help with the Armenian Relief Fund. The exhibition also featured correspondence from Turkish Minister of the Interior Talaat Pasha dated Sept. 6, 1915:

"To the Prefecture of Aleppo: You have already been advised that the Government by order of the Djemiet, has decided to destroy completely all the indicated persons [Armenians] living in Turkey. All who oppose this decision and command cannot remain on the official staff of the empire. Their existence must come to an end, however tragic the means may be; and no regard must be paid to either age or sex, or to conscientious scruples."