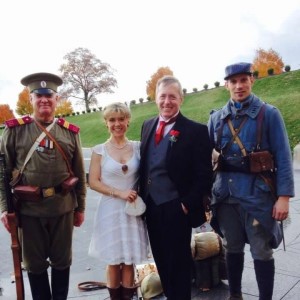 The National WWI Museum and Memorial is fortunate to have a legion of supporters and donors who claim some personal connection to the institution. Few, however, can match the deep ties shared by John and Linda Sproul of Ypsilanti, Mich.

John started early, developing a youthful fascination with history, specifically the early 20th Century. As a child he would collect artifacts of the era, including medals and trench art. He first toured the Museum in 2006, and that experience motivated him to promise himself yearly visits to Western Front sites in France and Belgium.

When he met his future wife, Linda, she quickly acquired his fascination with the Great War. On a trip together to Western Front battlefields in 2015, they stopped at the cavernous Lochnagar crater in France. That’s where John proposed to Linda.

By that time, John and Linda were avid fans of the Museum and Memorial, so when it came time for the ceremony, they decided to hold their wedding at a bed and breakfast less than a mile away at 11 a.m. on Nov. 11, 2015 – Veterans Day and the 97th anniversary (to the minute) of the ceasefire that stopped the fighting on the Western Front. John says they chose that moment “in honor of all who served in the war.”

“Following our wedding ceremony,” John says, “we toured the Museum in our 1920s-style wedding clothes, and because we mingled with re-enactors who were in the Museum, we were mistaken for tour guides.”

For John and Linda, the Museum and Memorial is an indispensable monument to history and a reminder of what the war meant to our nation and the world.

“The Museum and Memorial is our country’s most powerful tribute to people of all nations who were caught up in the catastrophic struggle of the Great War,” John says, “and as we commemorate their efforts and sacrifice, we promote the value of virtues such as courage, sacrifice, commitment, resolve, and hope.

“The collection and experience of touring the Museum and Memorial helps us understand how the conflict shaped our present world and inspires us to be champions of peace and diplomacy so that our world wars of the last century will not be repeated.”

The Sprouls visit the Museum and Memorial whenever they can. They agree on the unique quality of the exhibits, but each has a specific favorite.

For John, “Walking across the glass bridge with the field of poppies below which represents all who lost their lives because of the war is always a moving experience. The Renault tank is my favorite display, and I always marvel at the courage it took to climb into those cramped machines. The fragment of stained glass from the ruins of the cathedral in Rheims is a close second.”

As for Linda’s favorites, she says, “The flour sacks which were embroidered by grateful Belgian women after using the flour donated by the United States; the field ambulance with the Ernest Hemingway story, and, of all things, the Museum’s corkscrew pickets used as posts for barbed wire. I’m jealous as I only have one. It’s in our living room, a Christmas present from John found in an antique store near St. Louis where they once lived.”

Their fascination with the war and appreciation for the Museum and Memorial continue to evolve and grow with time. They recently joined the Pershing Legacy Society by including the Museum and Memorial in their estate plan, and they have fulfilled their commitment to the most recent capital campaign. The Sprouls will serve on the auction committee for Night at the Tower in 2022 and are looking for ways to further the institution’s development through volunteer activity.